Why would two guys decide to produce a tribute album for a local band by local bands and then spend over a year and a half putting it all together? And who would be interested in it anyway?

For Tom Hearn, what started as a spark of an idea turned into a flame when he teamed up with compatriot Rob DeRosa, owner of ThinManMusic. Soon these New Haven, CT local scene mavens were fanning that flame into a fire that swept through this town and spread across the nation into the cities and states that many New Haven music veterans now call home. Tom’s idea became a roaring wild fire crackling with musical intensity because the band that the tribute was for was The Furors.

A friend had invited me to a coffee house gig he had booked featuring The Furors doing an acoustic show – not their normal style of playing. The Furors normally play plugged in with Tom on drums, backing vocals and handling any percussion chores that might pop up, while Derek plays guitar and sings, both in a manner that fit the quirky, intelligent pop ditties that make you wonder why the band They Might Be Giants could make a living on songs like these, while The Furors have gone relatively unnoticed. In this acoustic setting (and my first time seeing/hearing them) I was amazed. Derek played the guitar like a refined lunatic, holding it high on his chest for close intimate sounds, yet thrashing spastically when the punch and oommfff of the song called for it. Singing in altos and falsettos, he would bend and contort his facial muscles to help his voice find the idiosyncratic inflections needed to fit each of the compositions. In contrast, Tom sat behind his drum kit deceivingly stolid-like as he played not only the drums, but such percussion goodies like a toy piano, 5 different pitched bells (I’m sure there’s a technical name for them which I am uneducated on), a penny whistle, New Years Eve noise makers, a miniature gong, castanets, and a host of others with such precision and passion that the music created by the two of them jumped alive and swirled in my head. What seemed like two extremes were actually a team of unparalleled synch; mirroring each other with opposite styles to create a seamless tapestry of musical sound, all stitched together with lyrics of thesis quality depth transposed into 3-minute songs. Needless to say I was hooked.

A few months later I caught The Furors in their more familiar surroundings doing an electric show. While some of the intimacy of the first show suffered slightly, it was easy to see why people come out to listen to them. The show burst with energy, The Furors were on fire with passion and precision once again. None of what I had experienced in the acoustic setting was lost, just exemplified. I understood the timeless appeal and wondered why not only had I missed out on these guys for so long, but why they had never made it out of New Haven.

Perhaps no one can answer that, but Tom Hearn, Rob DeRosa, ThinManMusic, and 38 bands with their roots and hearts in the New Haven CT music scene want to at least let The Furors know that they haven’t gone unnoticed, or unappreciated. These artists have taken the songs of The Furors, and with the same passion and precision, created a double CD that burns with respect and gratitude.

Where do I begin? Platter A? Platter Z?
This is a difficult question at any given time, and the reason I’ve become accustomed to placing both CDs into the player and hitting “random.” With 38 tracks by 38 bands there is something here for everybody, and more. Sure there will be peaks and valleys depending on your own individual tastes, but it’s all well worth the listen. The most amazing thing about this collection (and a characteristic that most audiophiles will affectionately identify with) is the way a particular song or two will hit you and stand out amongst the others, only to find several days later another song or two that stands out and a week later another one, and then another one… If I were to list my favorites I’d have to begin with the first stand outs, then progress on, and on, but that in turn would not do justice to the songs that I have yet to ultimately discover. Sure I’ve listened to them all, but there are still many other gems to unearth. I listen over and over again, and I have my favorites, and my favorite moments where certain instruments/instrumentations stand out, where a line of lyrics hits me and causes me to smile, gleam, or even reflect for a moment, where I’m taken by certain individual artists’ visions and renditions of songs and not only wonder how they came up with these particular arrangements/styles, but also am floored by some of the minute intricacy that they manage to infuse in perfect Furors fashion.

I’m not going to single out tracks or artists, to do so would be to slight someone, and none of these artists deserve that. Because of their respect for The Furors, these fellow artists all went about their individual songs in manners that fit the project, from many of the New Haven “old school” scenesters delivering faithful renditions of their favorite Furors classics, right up to some of the newest bands attempting to establish themselves in the city, who reached into The Furors bag of musical goodies and reinvented the songs into their own musical styles. What we have is a beautiful overview of a music scene that has simmered in the Elm City. But most of all, we have a testament of the exceptional song writing team of Derek Holcomb and Tom Dans. If success were measured by the adulation and respect of your peers, The Furors would be platinum.

Why would Tom Hearn and Rob DeRosa spend over a year and a half putting all this together? 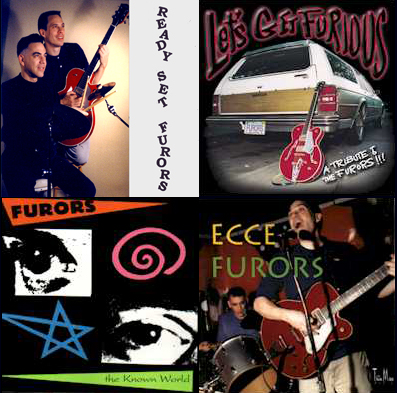